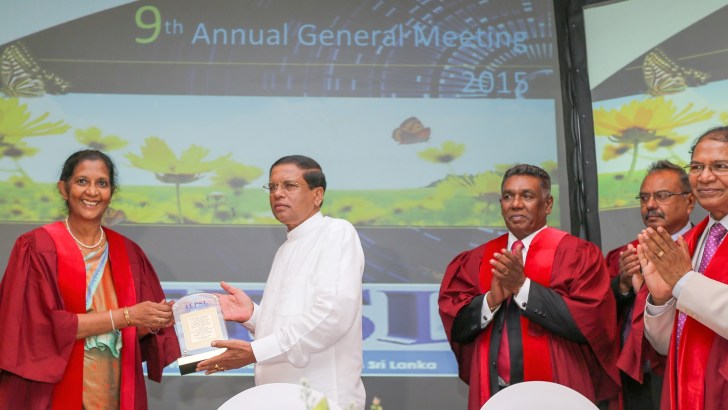 President Maithripala Sirisena says Sri Lanka is ahead of other countries in South Asia in protecting environmental standards. “My aim is to take Sri Lanka at least to 25th position of the Index of Protecting Environmental Standards, from its current position of 69”, he added.

The President was addressing the 9th Annual Summit of the Institute of Environmental Professionals of Sri Lanka (IEPSL), held today (Oct. 20) at Waters Edge Hotel, Battaramulla.

“Though we see environmental protection as simple actions such as planting of a sapling, prevention of cutting trees and solid waste management, lot of groups including humanists and scientists have paid special attention on this issue with the scientific findings and inventions of the scientific world” the President said. “It is a matter of satisfaction that a group of scholars such as the members of the Institute of Environmental Professionals of Sri Lanka is playing a leading role in this task”, he added.

President Sirisena recalled that he took few stern actions when he undertook the Ministry of Environment. He assured that the government would take legal actions against those who destroy the environment, irrespective of their status.

The President pointed out that even though during the past era, many Gazette Notifications were introduced which are related to the environmental conservation, these Gazettes were not implemented properly. He further said that it is the political culture of this country to change the decisions of the previous governments or decisions by a previous minister when a new government or minister come to power, though those decisions are for the betterment of society.

The Presidential Secretariat will implement several projects, including an environmental conservation project and the government expects the fullest cooperation from scholars and intellectuals of this country in this regard, the President further said.

The President also inspected an environmentally friendly electric car imported into the country, at the venue.

The areas the Institute will work

The Institute will continue to work with all the stakeholders including private sector, government sector and non government sector towards achieving excellence in environmental conservation for sustainable development.

IEPSL issuing Car Stickers for all members. Price will be Rs. 250/- per sticker, Size: 4"x4" and available only at the IEPSL Secretariat.